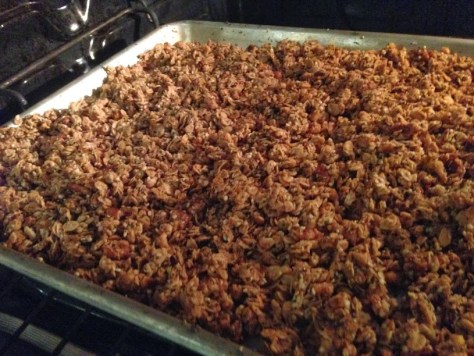 Granola is a great alternative to cereal, but it’s expensive by comparison. Fortunately it’s very easy to make yourself. Not only is it much cheaper, but also you get to control what goes in it and enjoy the smell of fresh baked granola. I like to eat granola clusters with whole milk yoghurt and fresh fruit.

This recipe is for two  sheet pan, enough for about a week.

Pour onto 2 lightly oiled sheet pans. Cook for 1 hour and 15 minutes, flipping over once after about 40 min. 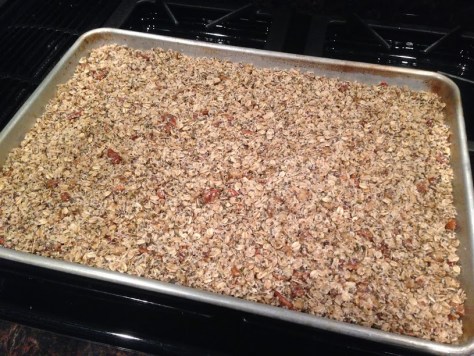 Remove from oven and let cool before filling up into cereal containers. 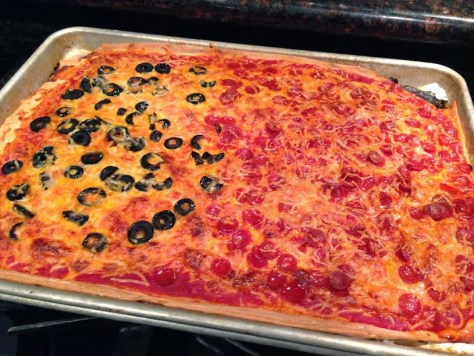 This is a very fast and easy pizza recipe, I’ve done several times. It’ll take longer to go to the restaurant, and these pizzas taste just as good or better, plus it’s a lot of fun to make. Works really well in the Kitchenaid mixer with dough hook attachment. The recipe will make two sheet pans and a pie pan, enough to feed 5 – 7 people.

Flour work surface and flatten out dough with rolling pin. Dough is enough for two large sheet pans and a round pie pan.

Lightly coat pans with flour and spread out dough. Trim away dough hanging over rim of pan.

Top first with tomato sauce followed by shredded cheese or pesto and then cheese. Then add more toppings like mushrooms, leaf spinach and whatever you have in the fridge.

Bake at 375 degrees C (190 degrees C) for 20 to 25 minutes or until cheese is melted and dough is light brown. Depending on oven size you might want to start baking first pan while getting second pan ready and so on. 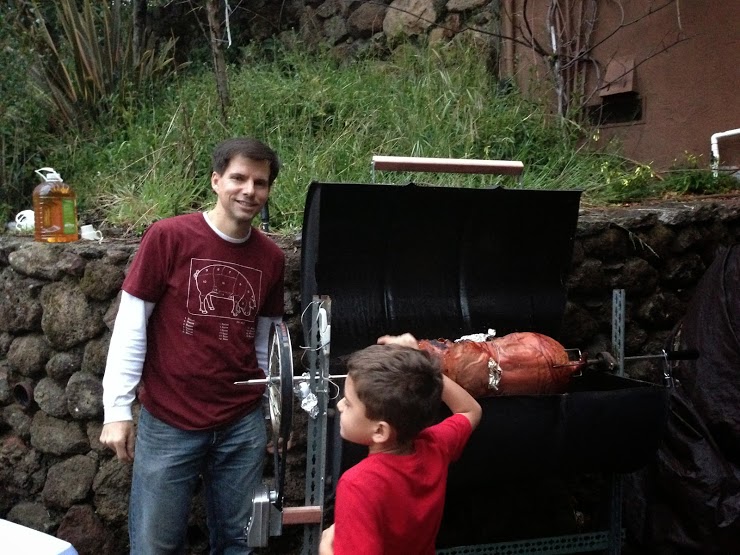 A long time ago I took a canoeing trip through eastern Poland and on one of the campgrounds a few folks there were barbequeing a pig on a spit. Ever since I’ve been thinking about doing something like that. Recently a lot of instructables on the topic had sparked my interest and when my birthday came around I decided it’s time for a pig roast this year!

Buying a new pig roaster will cost you between $800 to $20,000, even renting one from a party rental place cost still $200 and it seemed like a fun project, just looking at all the videos.

So I went with the smaller simple design of a 55gal drum Rotisserie. I got the drum, a rusty old pillow bearing and the angle irons from a Scrapyard. Make sure to get a drum that previously contained food stuff, i.e. olive oil.

The rotisserie motor, spit and forks are from One Grill. I thought about using a scrap motor but they cost more than the new motor. The kid’s bicycle wheel is from the scrap pile at a bicycle store and assorted small parts and rust covering and heat resistant paint are from several hardware stores.

I had to drill many holes into the barrel and L beam. When drilling into steel, use a carbide bit with cutting oil and go very slow with the variable speed drill but use lots of pressure. If you go too fast, the drill bit will burn out quickly and you only get a few holes through.

Instructions on how to build a Rotisserie BBQ out of a 55 Gal. Drum 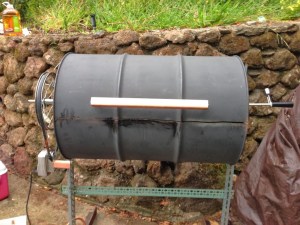 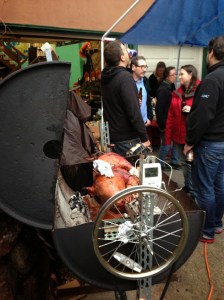 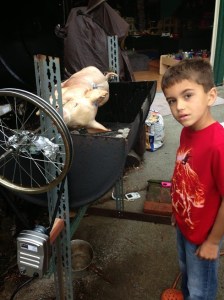